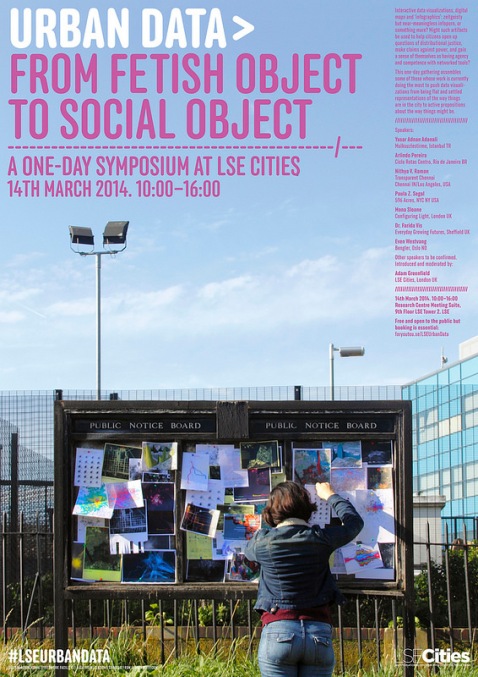 Anyone paying even casual attention to contemporary media, whether popular or scholarly, is now exposed to a steady cascade of voices assuring us that we live in something called the Age of Big Data.

Whichever audience they are aimed at, such assertions are generally illustrated by images of interactive visualizations, digital maps and “infographics.” Each of these may originally have been intended by its designers to convey some complex state of affairs, readily and accessibly, but has been used in this context primarily to signify the zeitgeist itself.

These images furnish the practice of data analysis and decision support with a visual rhetoric, and they circulate widely. They are reproduced endlessly on blog posts, posted to Facebook and Pinterest and Tumblr, tweeted and retweeted and retweeted again. They circulate, and they seduce. They are admired as much for their beguilingly aesthetic qualities as for any analytical or practical utility they may have. The result is that while data visualizations surely do a kind of work in the world, it may not be the kind of work we’re led to believe they’re capable of doing.

This is (or, I’d argue, ought to be) of particular concern to those of us with an interest in urban politics specifically. It leaves us very little with which to challenge the story we are told about Big Data in cities: that it will transform the processes of municipal governance and administration — that leveraging it can raise emergent chokepoints and trouble spots to the attention of the relevant authorities, cut through circumstances once thought intractable, even help managers anticipate and preempt crises before they quite coalesce into being. When this rather sterile and technocratic conception of data-driven superintendence is fused to a cultural expectation that data visualizations function as pretty pictures and little more, virtually everything that is interesting and potentially emancipatory about them is left on the table.

The intention of this one-day gathering is to convene some of those whose work is currently doing the most to push back against this set of circumstances. It aims to disturb the data visualizations we’re offered as settled facts, disinter them from the loam of zeitgeisty but near-meaningless infoporn that has settled over the practice of data visualization (and which furnishes more than one glossy coffee-table book), and activate them instead as situated social objects.

We’ll be discussing questions like…
– Who makes the data represented in interactive visualizations and maps, and how?
– Who are the parties responsible for gathering the data, and what criteria do they use for the selection and representation of information they feel to be salient?
– What pressures may be operating on either selection or representation?
– What domains of urban life seem to lend themselves most readily to intervention via participatory mapping or data visualization?
– How can those who generated the data in the first place gain access to it later, either in raw form or as analytic product?
– What implications follow from the choice of a given technical platform or presentation strategy?
– What does it feel like to work with data, in any of these phases or aspects?
– What can communities do with data visualization, as practice or artifact?

Our speakers will present some cases in which local communities from all over the planet have used participatory data-gathering and -mapping practices to open up questions of distributional justice, make claims against power, and gain a sense of themselves as having agency and competence with networked tools. Together, perhaps we can begin to push data visualizations from being fetishized tokens of a notional futurity — and, at best, flat and settled representations of the way things are in the city — to active propositions about the way things might be.

Featuring presentations from and conversations with

and introduced and moderated by yours truly.

Free and open to the public, but registration is essential. Robin Howie‘s lovely poster is here; feel free to download and disseminate as widely as you please. Please use hashtag #LSEUrbanData. We look forward to seeing you.