“Against the smart city”: Impact metric 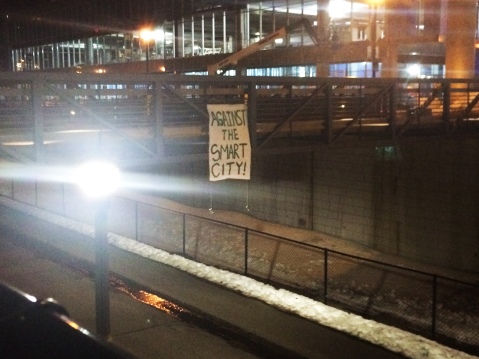 I’m fairly sure that I share with most other writers the uneasy sense that every word issuing from my keyboard ultimately flies off into the great void. I go to sleep at night safe in what is surely the statistically reasonable belief that the things I write are at best parsed quickly, in a state of distraction, and never really land in any meaningful way. This isn’t occasion for bitterness or resentment, mind you. It’s just the inevitable consequence of living in a time of massive informational overload. There’s such fierce competition for each precious increment of attention, and the kind of things I write about, by their very nature, have a hard time crowding out other claims. It’s something you learn to accept if you hope to face the world with anything like equanimity, let alone cheer.

Maybe this is why I felt such a gut-deep thrill at learning that some Minnesota activists opposed to the testing of a new autonomous shuttle hung this banner from an overpass last night. If nothing else, it suggests that at least some of what I tried to express in “Against the smart city” escaped the abyss, and managed to register somehow. I’m sure this is laughably small potatoes from the perspective of anyone whose contributions actually do shift the global discourse, but for a decidedly non-A-list writer, such evidence of impact is supremely gratifying.

I am — naturally, because this is me — ambivalent about the idea that my work can be mobilized in the context of this specific protest. I think it’s far from clear that autonomous mobility will necessarily drive the oppressive métro, boulot, dodo cycle of late capitalism, as this particular protest assumes, and that there’s a decent argument to be made that if properly designed, it will physically concretize the right to the city in a way few other modes of getting around have ever been able to — particularly for citydwellers of limited personal mobility.

Nevertheless, that “if properly designed” is a major stumbling block, it’s far too late in the day to place any stock in the good will or benevolent intentions of would-be technological disruptors, and in any event, intent isn’t magic. People are right to question every aspect of the propositions they’re confronted with by smart-city advocates — to question, ascertain whether what is to be installed accords at any point with their needs and desires, and protest, disrupt and prevent the deployment of anything that does not. And that very much includes mobility systems whose designers cannot adequately justify the thing they have conceived, either to their intended audience, or to the communities through which their infrastructure runs.

At present, I don’t know enough about the Hennepin County autonomous-mobility test to determine whether or not I personally would oppose it. But then, I don’t live there. It’s enough for me to know that at least some of the people who do have yet to be convinced that it’s anything but a harbinger of exploitation and oppression yet to come. I’m delighted, and deeply gratified, to see my words invoked in their struggle.

PS If anyone responsible for this banner should happen to see this, please do get in touch — anonymously, if you prefer. I’d love to hear from you.